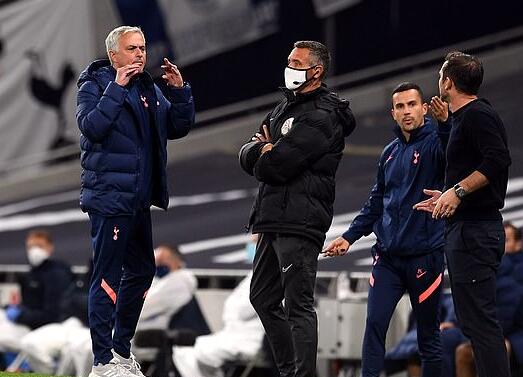 According to British media reports, in the League Cup between Tottenham and Chelsea, Mourinho and Lampard had an argument on the sidelines.

After Werner scored for Chelsea, the two coaches had a situation on the sidelines. Due to the empty space, Mourinho's voice is not difficult to hear: "Fxxxing hell, Frank, when you are behind 0-3, you don't stand here. "Mourinho's remark was a satire of Lampard. Chelsea once fell behind West Brom by 0 to 3 (later the Blues chased it to 3 to 3). At that time, the magic lamp was a little depressed and didn't talk so much.

The "Daily Mail" disclosed that Mourinho thought Lampard was talking too much on the sidelines, so he wanted to keep the opponent quiet, and Lampard laughed at Mourinho's complaint. After the game, the pair of former masters and apprentices said that it was just the emotions in the game. Once the game ended, they all made up.

This is not the first time Frank Lampard has clashed with a famous coach. When Chelsea played against Liverpool in July, he and Klopp had quarrels on the sidelines.